Český Krumlov is one of the cities of the Czech Republic that you should pay a visit to. The city is located on the Vltava River. In 1992 the historic centre of the city became the UNESCO World Heritage Site. Vacation in Český Krumlov is popular with tourists from different countries because there is plenty of opportunities for the exciting and educational vacation.

Brief history of the city

For more than 300 years the city had been under the rule of the noble Rosenberg family. They had the rose in their coat of arms. Since then it hasn’t changed. The city suffered from the looting during the Thirty Years’ War.

In 1806 the city was part of the Austrian Empire and in 1866 it was part of the Austria-Hungarian Empire. During the World War 2 and the period of post-war communist regime the city experienced a great decline. The city revival started after the Velvet Revolution. Vacation in Český Krumlov is a trip to one of the most popular tourist destinations.

Before we start telling you about the tourist attractions in the city, we would like to mention that the historic centre of the city is the UNESCO World Heritage Site.

Last minute deal to Český Krumlov is a great chance to visit the second biggest castle in the country – the Castle Český Krumlov. Together with the Castle Park the complex covers the territory of 10 ha. Different architectural styles are represented here: gothic, renaissance and baroque.

Trip to Český Krumlov will hardly leave you indifferent. Here you can visit the three-storied Cloak Bridge (1767), the St. Vitus Church (1309), the City Hall (1580), the wax Museum and the theatre with the revolving auditorium surrounded by the circular stage.

Low budget vacation in Český Krumlov is a wonderful opportunity to try water sports that are very popular in the city. You can also watch professionals go canoeing or enjoy other water sports..

Low budget vacation in Český Krumlov also gives you an opportunity to see the Golden Crown, one of the oldest monasteries in Bohemia (historical name of the Czech Republic). The monastery is located ten kilometers from the city.

Last minute deals to Český Krumlov offer you to take a walk around the city ,during which you can plan your own route. Low budget vacation in Český Krumlov won’t be complete without a visit to the theatre built in the 1766 in the baroque style. Don’t miss your chance to walk along the Vltava River.

Original prices suggested by the hotels and airlines in Czech Krumlov 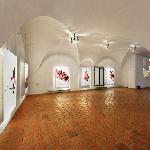 The gallery and the downstairs café are very pleasant places to go when it´s too warm, too cold, too rainy... We spent almost five hours there and we enjoyed it very much. next... More on TripAdvisor