Vacation in Prague – a dream destination for tourists!

Prague, the capital of the Czech Republic, is one of the most beautiful cities in the world. Vacations in Prague have been popular for many years. Prague is not only the largest city in the country, but also its main cultural, financial and political centre. Vacation in Prague is pleasant at any time of the year, bearing in mind the fact that it is not a resort but a city full of tourist attractions. Thanks to our website you have a chance to spend an unforgettable vacation in Prague on a low budget!

Historical facts about Prague for tourists

According to the historical studies this Slavic city was founded in the VI century. Only four centuries later it became the capital of the Czech State. Three more centuries passed and the citizens began to build the vallum around the stone buildings near the square.

The XIX and ХХ centuries were a very eventful period in history of Prague. In 1866 after the Austrian defeat in the war with Prussia the city vallums were pulled down because the city needed no more defensive walls. This led to the expanding of the suburbs, construction of new plants and factories.

Prague began to grow and develop rapidly in 1918 when it was proclaimed the capital of the independent country of Czechoslovakia. The population of the city in 1939 was more than one million people. At this time the public transport reform was carried out. New tram lines were built, city buses were introduced, new trolley and underground line were designed.

After the World War 2 Prague suffered under the Communist Regime. The population of the city decreased and became mono-ethnic; many cultural figures and politicians were imprisoned and executed.

Such a great variety of famous tourist attractions in Prague makes it almost impossible to name all of them. It would be interesting to learn something about the most celebrated landmarks of the capital city for those who are planning to visit Prague.

Last minute deal to Prague is a great opportunity to havea low budget trip and have a vacation with lots of options.Low budget vacation gives you a chance to visit the Old Town, the largest castle in the world – the Prague Castle, the Golden Lane, the Little Quarter, the Petřin Lookout Tower, the Powder Tower, the Strahov Monastery and many others.

Low budget vacation in Prague offers you walks around the city, visits to the Charles Bridge, the St. Vitus Cathedral (the construction of the cathedral lasted for 600 years), the National Theatre, the Municipal House, the National Museum, the National Gallery, the W.A.Mozart’s museum, (the Bertramka villa) and other tourist attractions.

Trips to Prague are popular with tourists from all over the world, because in this city even the ordinary family houses are beautiful and have historical features. Last minute deals to Prague are available on our website. Our prices will be a pleasant surprise for you!

Original prices suggested by the hotels and airlines in Prague 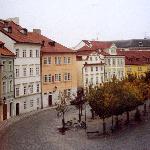 The Old Town has at its heart the Square which began as a Market place. It is full of imposing municipal and church building as well as many cafes, restaurants, pubs and shops. next... More on TripAdvisor