The indescribable beauty of Marseille

All tourists dream about a vacation in Marseille because it is not a usual city but a cultural and economical centre of the country! Marseille is the largest port in France and in the Mediterranean. In 1852 an asteroid 20-Massalia was named after the city of Marseille. Last minute deals to Marseille are available on our website!

The city was founded in 600 BC under the name of Massalia. The founders of the city were the Phocians, Greeks from Asia Minor.

Thanks to the ideal location and transport accessibility the city began to grow and develop and very soon the city prospered as a big trading centre.

In the I century BC Massalia was captured by the Caesar’s army. Ten centuries later Marseille became a prosperous city again thanks to the efforts of the dukes of Provence. The city became an important transportation hub and a big trading centre during the Crusades.

Throughout its history Marseille had its ups and downs. For example, during the 19th century the city prospered thanks to the colonial conquests and the opening of the Suez Canal. During the World War 2 Marseille was the most significant stronghold of resistance. Low budget vacation in Marseille is a wonderful chance to know more about the history of the city from the local people.

Marseille attracts tourists from all over the world because there is plenty of exciting tourist attractions in the city. The most significant religious landmarks are the Abbey of St. Victor (one of the first monasteries in Gallia), the Basilica of Notre Dame de la Garde and the Cathedral of Saint Mary Major.

Low budget vacation in Marseille is a perfect chance to pay a visit to different museums, such as the Museum of Fine Arts, the Marseille History Museum, the maritime Museum, the Museum of Mediterranean Archeology, the Musée de la Faïence, the Fashion Museum. Last minute deals to Marseille give you an opportunity to take a look at the Palais Longchamp and the Château d'If. It is situated in the suburbs, one mile away from the city, on the Frioul islands.

While on vacation in Marseille you can enjoy long walks in the gardens and parks of the city. The most beautiful of them are the Park of Ruins, the Jardin du Pharo Park (here you can also see the Pharo Palace) and the botanical garden near the Borelli Castle.

Low budget vacation in Marseille won’t be complete without visiting the city port, the cruise ship terminal, the Boulevard Garibaldi,where you can find plenty of restaurants, theatres, fountains and cafes. Vacation in Marseille also offers you to walk along the main street in the city – the Paradise Street. The street becomes even more glamorous when you move to the south.

Vacation in Marseille can be affordable thanks to our website! We offer you the most reasonable prices!

Original prices suggested by the hotels and airlines in Marseille

Marseille's reviews, France (Castle of If) 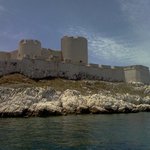 Given that the Count of Monte Cristo didnt exist they make quite a thing about it ! At €10 each for the boat trip out and a further €5.5 to get in it felt a bit underwhelming. We h next... ad a nice day and a wander but got the next boat back so the whole tri More on TripAdvisor