The south of France, the Côte d'Azur- this is the place where the sun’s ray illuminate the beautiful scenery, the place where you can spend your dream vacation! Low budget vacation packages to Saint-Tropez are very popular with tourists because this is one of the most loved tourist destinations in France. The population of the city is just over five and a half thousand, but the tourist inflow increases this number considerably. Last minute deals to Saint-Tropez on our website will add more spice to your life and leave unforgettable impressions!

Historical past of the city attracts tourists to Saint-Tropez. The first settlement on the territory of modern Saint-Tropez appeared in the II century BC. In the Х century the city was part of the Emirate of Fraxinet and later it was part of the Country of Provence. You can see the reconstructed defense fortress that has survived to the present day.

An important event in the history of Saint-Tropez was the defense of the city from the Spanish fleet in 1637. The local people managed to repel the attack of 22 galleons. Nowadays a traditional procession is held to celebrate this heroic victory.

In the first half of the ХХ century more and more artists began to settle in the city. The first famous artist was Paul Signac. The city is also popular because some films were shot near the city in the middle of the ХХ century. A series of films about the adventures in Gendarmerie Nationale also have a connection to Saint-Tropez (starring Louis de Funès).

A trip to Saint-Tropez gives you a wonderful chance to spend an unforgettable beach vacation.

Tourism forms a big part of the city economy. This small French town suits perfectly for a nice vacation. Here you can find everything you need: well equipped beaches, rich infrastructure, plenty of city tours and so on. Last minute deals to Saint-Tropez guarantee that you will get a wonderful suntan, enjoy the warm sea breeze and watch plenty of ships and yachts in the port. Low budget vacation in Saint-Tropez will bring new emotions and impressions, that you would certainly like to share with your family and friends.

Among all the famous landmarks in Saint-Tropez the most significant one is the fortress built in the XVI–XVII centuries. Here you can also visit the Museum of Modern and Contemporary Art.

Low budget vacation in Saint-Tropez gives you a chance to take long walks around the city , learn more about customs and traditions of local people, go fishing and try delicious French cuisine.

Original prices suggested by the hotels and airlines in Saint-Tropez 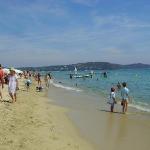 Probably the most famous beach in the area is well worth the day. The beach while a little crowded is clean with nice sand and in most areas the water is clear. There is a stretch next... towards the southern end that does collect some seaweed. There are sev More on TripAdvisor