Munich is a place for an unforgettable vacation!

Vacations in Munich have always been popular with tourists, because this German city on the Isar River is really magnificent. The capital city of the state of Bavaria has been famous for its beer brewing traditions. This is the place where the largest festival in the world, Oktoberfest, takes place. You can easily visit it if you buy a vacation package to Munich. Modern Munich is the centre of culture, science and education. Low budget vacation in Munich gives you a chance not only to visit a new city, but also to see an absolutely unusual place and get the impressions you will never forget!

The name of the city was derived from the Old High German “at the monks’ place”. The foundation of the first settlement dates back to the VIII century. Munich was given the city status in 1175. In 1507 the city became the capital of the united Bavaria and in 1806 it became the capital of the Kingdom of Bavaria. In 1810 the first beer festival, Oktoberfest, took place when horse races were organized in honour of crown prince Ludwig and Princess Therese’s wedding. The ХХ century was tragic for the city. Constant changes of government, devastation during the two World Wars, Nazism – all these things damaged the architectural and cultural look of Munich. However, today Munich is one of the most beautiful cities in Germany and you can go and see it for yourself after you book a low budget vacation package to Munich.

Places to visit in Munich

Low budget vacation in Munich offers you a variety of interesting excursions and walks around the city. A lot of significant tourist attractions are situated near the Marienplatz (such as the Old and the New City Halls). The Munich Frauenkirche is 99m high and it is considered to be the highest church in the city and one of the city symbols. The oldest church you can visit during your vacation in Munich is the St. Peter’s Church (it was built in the XII century). The Renaissance is vividly and entirely represented in the Michaelskirche in Munich. Vast majority of the kings and princes of the Wittelsbach dynasty are entombed here. The masterpiece of the Late Baroque, the Asamskirche, is another reason to organize a vacation in Munich that can be low budget and broaden your outlook at the same time.

Numerous museums, worth visiting, are located in Munich. The Old Pinakothek is one of the most attended places. The New Pinakothek, the Glyptothek and the German Museum are popular as well.

Last minute deal to Munich is a good chance to visit the luxurious English Garden. It is one of the biggest parks in the world. You should also pay a visit to the Olympic Park with many splendid architectural constructions. Low budget vacations to Munich will give you an opportunity to admire the largest Munich architectural landmark – the Nymphenburg Palace.

Last minute deals to Munich will make football fans happy, because the football club Bayern Munich is one of the leaders of the Bundesliga.

Low budget trips to Munich are possible and available. Just visit our website! Find out more about the costs of the vacation in Munich on our website.

Original prices suggested by the hotels and airlines in Munich 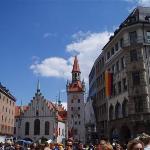 "The German city is a beautiful contrast of old and new", says Brotzeits regional marketing director. The Centre of Munich is full of life, day or night, with visitors from all ove next... r the world as well as with local for shopping and enjoying the activi More on TripAdvisor