Naples, the third largest city in Italy, is a very popular tourist destination. The city attracts with its rich history, plenty of historical landmarks and its unique location. The famous Vesuvius volcano is situated near the city. Trips to Naples guarantee that you will spend an unforgettable vacation full of pleasant experiences. Our website offers you the most affordable vacation packages to Naples!

Brief history of the city

The city was founded by the immigrants from Greece in the VIII century BC. At that time the city was known as Parthenope. Later Naples became a part of the Roman Empire.

From 638 to 1137 the city was the capital of the independent Duchy of Naples. After that it was part of the Kingdom of Sicily.

In the XVII century Naples was the second most populated city in Europe after Paris. The population of the city was 300 000 people.

Among all the tourist attractions in the city we would like to name the most outstanding. They are the Royal Palace, the Castel Nuovo, the Teatro di San Carlo, the National Archaeological Museum, the Museo Nazionale di Capodimonte, the catacombs, the Cathedral of Naples.

Low budget vacation in Naples gives you a chance to visit the Basilica of Saint Clare , the Castel Sant'Elmo, the Sansevero Chapel, the Gesù Nuovo church, the church of San Lorenzo Maggiore.

Vacation in Naples gives you a wonderful chance not only to stay close to the Vesuvius but also enjoy the beauty of this place. Last minute deals to Naples give you an opportunity to visit the nearby countryside in order to see Pompeii and Herculaneum. These are the two antique cities situated on the coast of the Bay of Naples. In 79 the eruption of Vesuvius destroyed both of the cities, leaving them to be buried under the ashes. The excavations at Pompeii and Herculaneum are open for tourists at the beginning of November.

Trips to Naples give you a chance to visit the magnificent historic city centre, which was declared the UNESCO Heritage Site at the end of the 20th century. You will also have a chance to listen to the local dialect.

An asteroid was named Parthenope after the city of Naples . Vacation in Naples won’t be complete without visiting the oldest pizzeria that opened in 1738. Naples is considered to be the birthplace of pizza and Margherita is believed to be the most popular one.

Original prices suggested by the hotels and airlines in Napoli 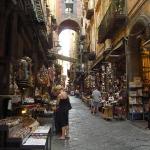 Its a good place to buy a fried pizza if you like or some souvenirs. Be careful about pickpocketing in this area. next... More on TripAdvisor