Warsaw is waiting for the guests

Warsaw, the capital and the most populous city in Poland, spread on the banks of the Vistula River. The place, where the antiquity and modernity are combined, where high culture goes hand in hand with strong economy, attracts tourists from different countries. If you are planning a nice and interesting vacation, Warsaw will be a perfect choice!

The XII century is considered to be the first stage in the foundation of the city. At this time the first wooden buildings appeared on this territory. Stone buildings and walls appeared only two centuries later because the city suffered from the attacks of the Teutonic Order.

During the World War 2 Warsaw suffered from Nazi occupation and it was badly damaged by the bombing. Anyway, after the war the city was perfectly reconstructed and now the historic city centre is the UNESCO World Heritage Site.

All the owners of low budget vacation packages to Warsaw have a wonderful chance to dive into the world of historic beauty and architectural landmarks. The most celebrated landmarks in the city are the Warsaw Citadel, the Tomb of the Unknown Soldier, the Palace of Culture and Science, the St. Peter and Paul's church, the Katedra Świętego Ducha, the Orthodox cemetery and other places of interest.

While on vacation in Warsaw don’t lose your chance to see the Aleksander Zelwerowicz Theatre Academy, the Military Technical Academy, the Academy of National Defence, the Fryderyk Chopin University of Music and others.

Last minute deals to Warsaw will be a good choice for those who like modern architecture. Here you can find dozens of skyscrapers and tall buildings, built in the ХХ and ХХI centuries.

Vacation in Warsaw on a low budget is absolutely possible. All you need to do is use our website and choose the perfect vacation package for you. Vacation costs on our website will be a pleasant surprise for you!

Original prices suggested by the hotels and airlines in Warsaw 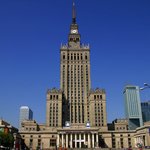 You can see the city from above, bit there is little explanation about what you see. And there is café and a souvenir shop on the top. Thats it. next... More on TripAdvisor