Wrocław, the city of bridges

Wrocław, one of the biggest and oldest cities in Poland is located on the banks of the Odra river, in its middle basin. Low budget vacation in Wrocław is always unforgettable, thanks to the walks through this beautiful city and the great number of bridges. Today there are more than 220 of them in the city. A trip to Wrocław is a wonderful chance to spend your vacation or weekend. The city was called the cultural capital of Europe in 2016. Last year the UEFA Euro 2012 football matches took place here.

History of the city for tourists

According to the legend a Czech prince Wrocisław founded the city in 915–921. The city is believed to be named after him. The official date of the city foundation is considered to be the year 1000, when Wrocław came into possession of Boleslaw the Brave. In 1261 the city was reconstructed after the Mongol attacks and it adopted Magdeburg Rights.

Since the second part of the XV century the city had been the constant target for Germany. In 1741 Wrocław surrendered to Prussia. Since 1871 the city was part of the German Empire.

1919 was the year when Wrocław joined the Weimar Republic. At that time the city was the centre of the new province Lower Silesia.

In spring 1945 the city was the scene of the fierce battle between the retreating German Army and the Red Army which was pursuing it.

Among the great number of tourist attractions we should name the Archdiocese, the Cathedral of St. John the Baptis, the Centennial Hall , the Panorama Racławicka, the Wrocław's dwarfs, the Cemetery of Soviet officers and the shopping centre in the Peschanaya Street.

Low budget vacation in Wrocław will brighten up your daily life. You will have a chance to visit the Wrocław Fountain and admire the unique performance of dancing water. No visit to Wrocław can be complete without a visit to the Town Hall, a nice building in the centre of the city. While on vacation in Wrocław you can also visit the Opera House, the old Water Tower and the statue of Boleslaw the Brave.

Low budget vacation in Wrocław is a chance to spend a wonderful time , enjoy the beauty of the Grunwaldzki and the Rędziński Bridges. Trips to Wrocław are a great opportunity to visit the new city stadium, built for Euro 2012.

Last minute deals to Wrocław offer you to pay a visit to different institutions such as the University of Wrocław, the Wrocław Medical University of Silesian Piasts, the Oskar Lange Academy of Economics, the Military Academy of Land Forces, the Ludwik Solski State Drama School and others.

Low budget vacations in Wrocław give you a chance to learn more about the local history. Vacations in Wrocław attract tourist all the year round because it is not a resort but a city with numerous tourist attractions. Vacation costs aren’t usually high. Vacation packages are always available on our website. Choose our website if you want to spend an unforgettable vacation in Wrocław on a low budget.

Original prices suggested by the hotels and airlines in Wroclaw 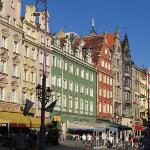 Wrocławs Rynek is possibly the nicest one I have visited. Its large, and the colourful buildings are beautiful. You will end up here by accident on any trip to Wrocław, so its not next... worth telling you to go, but it will definitely be one of the things t More on TripAdvisor