You can’t underestimate the vacation in Saint Petersburg. It is the most beautiful city in the Russian Federation, its cultural capital and the second largest city after Moscow. Saint Petersburg is the third most populous city in Europe and the first largest European city that is not the capital. Moreover, Saint Petersburg is the northernmost city with the population of over one million people. It is a big transportation hub and a significant economical, cultural and scientific centre. Vacation package to Saint Petersburg gives you a chance to visit one of the most important cities in Russia.

The city was founded in May 1703 when the Peter I (Peter the Great) decided to “cut a window through to Europe”. At first the city was named Saint Petersburg. Later the city was renamed twice. At first it was named Petrograd and then Leningrad. The Siege of Leningrad during the Great Patriotic War is regarded as one of the most destructive events in the history of the city. In 1965 the city was awarded the title of the Hero City.

Trips to Saint Petersburg give you a wonderful chance to visit this beautiful city with numerous architectural landmarks and sculptures.

Before telling you about the places of interest in Saint Petersburg we should say that there are 8464 objects of cultural heritage in the city. Low budget vacation in Saint Petersburg gives you a chance to visit such landmarks as the Hermitage Museum, the Peterhof Palace, the Russian Museum, the Mariinsky Theatre, the Boris Yeltsin Presidential Library, the Peter and Paul Fortress, the Smolny Institute, the Winter Palace (situated in the Palace square), the Nevsky Prospect and the Vasilievsky Island.

Football fans will be excited to buy vacation packages to Saint Petersburg and watch the game with the legendary FC Zenit. Vacation costs will be lowif you use our website. We can organize a vacation in Saint Petersburg on a low budget for you!

Original prices suggested by the hotels and airlines in Saint Petersburg 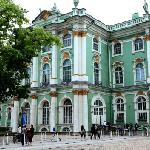 This is the most amazing palace I have ever seen. The wealth and opulence is beyond comprehension. The museum collection is good...I loved seeing the Kandinskys. next... More on TripAdvisor