Vacation with delight in Marbella

Marbella is the most exquisite, stylish and modern tourist destination in Spain with the population of 85 000 people. During the tourist season the population of the city increases three-fold. When you spend your vacation in Marbella you can enjoy watching how the most expensive yachts line up at the shore marina.

The city belongs to the province of Malaga which is the part of the autonomous community of Andalusia. It is believed that San Bernabeu protects the city.

The name of the city has the pre-Roman etymology. It is the combination of two words. The first words is MA + AR = MAR. It means “lots of water”. The second word is BILA/BILLA, that means “mountain”.

In the second half of the XX century this popular resort attracted a great number of tourists from Germany, England and the former Soviet Union.

Some time later the city reputation was destroyed because of many rich foreigners who came here fleeing from justice. The thing is that Spain wasn’t a member of the extradition treaty. Today the city is considered to be a perfect place for a vacation.

While on vacation in Marbella you may hear a story about an arms dealer who used to live here until 2007. He was known as the Prince of Marbella.

With every trip to Marbella you learn something new about the people from around the world and their traditions. At the end of the XX century, the city mayor Jesus Gil was involved in a number of corruption scandals.

The vacation costs may vary depending on the time of the year and the length of your trip but you shouldn’t forget that you have a chance to buy low budget vacation packages to Marbella. If you are the lucky owner of this vacation package you should necessarily visit the fashionable Puerto Banus Port that is 4km from Marbella.

Tourist attraction in Marbella that are worth visiting

You will absolutely agree that vacation in Marbella can be cheap and unforgettable at the same time. You can hardly find another city with such picturesque seaside boulevards with a public beach. The renovated Old Town of Marbella looks wonderful and decent.

You can plan your low budget vacation in Marbella in advance. Only imagine the magnificence of the Orange Square in the Old Town! In the maze of narrow street you can find the City Council.

Some more landmarks in the city

Last minute deals to Marbella will give every tourist a chance to enjoy the walk along the Avenida del Mar street, decorated with the statues by Salvador Dali. Low budget vacation packages to Marbella will impress you with the luxury of the water park and the Contemporary Engraving Museum.

Original prices suggested by the hotels and airlines in Marbella 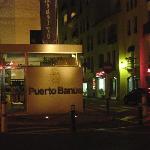 While in Marbella one can miss visiting Puerto Banus. Walking the Marina is very pleasant while window shopping all the designer shops and also watching the huge boats. The Marina next... is also lined by Gourmet restaurants where you might spot a celebrity. More on TripAdvisor