Vacation package to Kyiv is always a good choice, because the capital of Ukraine is considered to be the cultural, financial and religious centre of the country.

Kyiv is the seventh most populous city in Europe. It is a place where you can always meet the representatives of different cultures and nationalities. Low budget vacation in Kyiv will be full of bright impressions if you visit architectural buildings, historical places, try traditional Ukrainian cuisine and meet kind and hospitable people. Our website can help you spend a pleasant and low budget vacation in Kyiv.

Historical facts about the capital of Ukraine for tourists

Vacations in Kyiv are very educational because the capital city has an extremely rich history. Archaeological studies show that Ukraine is one of the oldest cities in the world. People occupied this territory in the Copper Age (Tripil culture). According to the legend Kyiv was founded in the VI century by three brothers: Kyi, Shchek and Khoryv and their sister Lybid. Kyiv had been a powerful capital city of the Kyivan Rus for centuries. Later the city was conquered by Mongol-Tatar people, the Lithuanians and the Poles. For a long time the city was a part of the Russian Empire (since 1667). Today low budget vacations in Kyiv give you a chance to visit the capital of the independent Ukraine, a magnificent city on the banks of the full-flowing Dnieper river with numerous avenues and parks.

Without doubt last minute deals to Kyiv are mostly popular for the rich architecture of the city. The most celebrated landmarks of the city are the Golden Gates, the Vidubich Monastery, the St. Sophia Cathedral, the Frolovsky Monastery, the monastery complex of the Kyiv-Pechersk Lavra, the Holy Trinity Church, the Mariinsky Palace, the St. Michel’s Golden-domed Monastery and others.

It is very easy to organize your vacation in Kyiv. You will spend most of the time walking in the squares, parks and gardens that cover most of the city’s territory. By the way, Kyiv is one of the greenest cities in the world.

Low budget vacations in Kyiv give you an opportunity to visit the Hydropark, the House with Chimeras , Kyiv underground, where every station has its own theme, and one of the stations is the deepest in the world.

You have a great chance to walk along the main street of the city – Khreschatik. Last minute deals to Kyiv help you save some money on the vacation costs without sacrificing the quality. Prices on our website will be a pleasant surprise for you.

Original prices suggested by the hotels and airlines in Kiev 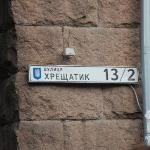 Most of the original building have been destroyed by Nazi bombings. Samples of Krushev and Stalin concept of architecture and enormity of public buildings over the relative small s next... ize of the person: part of the Socialist brainwashing and intimidation More on TripAdvisor